The owners of this garden love art – the art of gardening and the art of painting. Twelve years ago the owners decided to add a small number of plantings to their garden every year with the intent of achieving year-round color, varying proportions and textural interest. The owners’ father/ father-in-law was a well known Sandoval County Master Gardener and both grew up gardening in New Mexico. The owners have designed separate areas for ornamental shrubs, conifers, fruit trees, and vegetable bearing plants by taking advantage of micro-climates while preserving precious views. They have created garden rooms with courtyard walls, flagstone walk ways, covered patios and arbors.

Before you enter the garden gate between the casita/ studio and the north side of the home note the variety of native plants and cacti in the arid zone outside of the courtyard walls.  As you enter the oasis zone via the narrow courtyard entryway see how the owners increased ground space by planting trees in an upper level terrace and used a covered arbor to grow grapes.  Enjoy the wide array of flowering plants, shrubs and vines in the mountain facing U-shaped open patio with central fountain.   Rose shrubs and vines surround the adjacent large covered patio along with irises on two different planting levels.    Proceed through the atrium off the covered patio to reach the vegetable, herb and peach tree growing south area.  The owners enjoy yearly harvests of peaches, tomatoes, and other edibles.  Exit through the west garden gate to the driveway and walk through the antique wooden gate to view the cozy front courtyard featuring a trumpet vine arbor, a rock waterfall and a variety of woody shrubs and perennial flowers.

History of the Landscaping from the Owners
This Hacienda was built new on an empty lot.  There were junipers, chamisa, rabbit brush, cactus, four-wing salt brush, and small wild yuccas on the premises.

The original U-shaped house and casita and some of the walls were built in 2004. The landscaping was done in two main pieces and a little at a time over 12 years.  The original design and all subsequent additions took into consideration privacy and preservation of views in most directions.  Areas 1, 2, 5, 6 and a drip irrigation system were established at that time.  Southwest landscape author Judith Phillips was hired to consult on plants appropriate for this climate.  In 2008 a major addition was done to the house on the southwest end and the covered patio added. The owners brought in valley soil to fill the beds in Areas 3 and 4.  The walls were moved out and stuccoed. A larger drip irrigation system replaced the old one.  Big pots were added to capture rainwater under the canales.  The rock catchment basins were expanded and a French drain added as insurance against sudden monsoon flash floods.  There already was a French drain in the front yard under the waterfall.

The owners chose the plants and trees themselves, and planted them with manual labor assistance. The concept was to buy whatever was in season that month, so that something would be blooming most months of the year. They wanted to minimize the areas that needed lots of water and focus on low maintenance plants.  In addition they wanted a mix of evergreen and deciduous plants.  Nearly everything is perennial except for the annuals in Area 2, the flower pots, and a few in other beds. The different levels and steps, plus water features, portals, and pathways allow the gardens to look interesting, even when covered in snow. 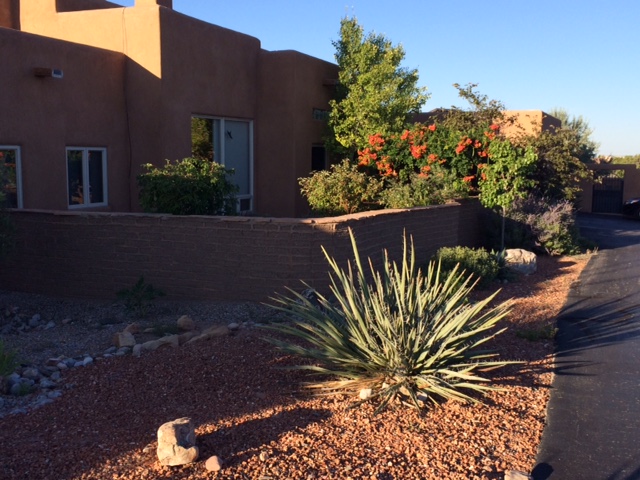 Soil amelioration in the garden areas is an ongoing process.  This lot was chosen, since it bordered an arroyo and thus was not too rocky and had sandy alluvial soil. The vegetable garden gets plowed up with a small rototiller every year, manure and mulch added.  The fruit trees, grapes, and evergreen trees were planted with added mulch and get fertilizer stakes every fall.  The roses get fed regularly with systemic rose food.  General purpose fertilizer is used once a year on bushes.  Blooming food is used monthly on the flowering areas during growing season.  Organic fertilizers and organic insect sprays are used in the fruit and vegetable areas. Marigolds help keep the bugs down in the garden and herbs help attract bees. Most everything gets pruned back in January or February, when the plants are dormant.  During the spring and summer, we have a manual laborer who helps keep everything tidy by working one morning, every two weeks.

There are six main garden areas at this hacienda.  Enter through the gate by the  casita/studio and walk down the steps to follow a stone pathway around to the back of the house.  This is Area 1 which includes fruit trees, an upper level of tall plants, and a covered grape arbor. 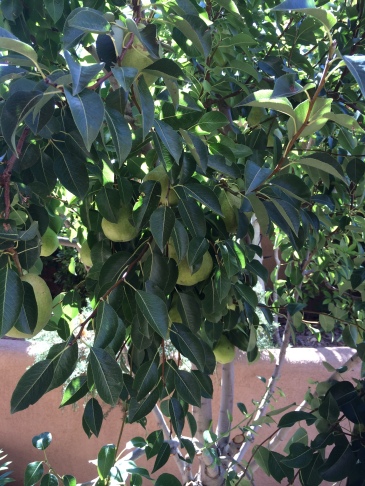 Area 2 is the U-shaped patio with central fountain surrounded by flower beds facing the mountains.  It has a wisteria and clematis on the southwest and a Lady Banks rose on the northeast.  Stone steps lead to the upper level of bushes such as forsythia, weeping rosemary, and rose of Sharon.

Area 3 is reached from the covered patio with built in grill and kiva fireplace.  It has a shade  garden cut into the patio and an upper flower garden with double “knock out” roses, a Joseph’s coat rose, annual flowers, and spring bulbs.  The lower stone pathway is flanked by iris and cherry sage.  The upper area has medium sized bushes, yarrow, and meadow sage.

Area 4 is the fruit tree and vegetable garden and is reached by going through the Atrium, off the covered patio.  Follow the pathway out the gate to the west to the paved driveway.  Follow the driveway into the double, wooden gates for Area 5.

Area 5 is the front yard and entrance to the house.  It has a waterfall feature, a covered portal, a

trumpet vine arbor, and a pathway around a secluded area with lavender, Artemisia, lamb’s ear, rhubarb, Oregon grape, iris, salvia, cotoneaster, and many others.

Area 6 is the outside desert landscaping along the driveway.  You will see it as you exit the front yard.  It features yucca and cactus of various types, blue juniper, lilac, blue mist, crab apple, ocotillo, cholla, and Russian sage.